By far one of my favorite genres of photography is the night time landscape.  Since I was a kid, I have had a fascination with space - the stars, the planets, the galaxies... everything about the night sky has always left me staring up into the darkness letting my imagination run wild for hours on end.

A short while after I got into photography I realized that it was possible to capture images of the night sky that resemble shots I thought only were only possible if you had a telescope and camera designed by NASA!  I had no idea that a regular ol' SLR and a lens with a super wide aperture could do the same job. I needed to try it! I had the SLR, all I needed was the lens.

After a little research, I found a few different lenses that would capture the results I was after, but the one that sang above all the others was the Nikon Fixed 35mm f/1.8.  On a spur of the moment purchase (All of my camera equipment is spur of the moment... If I think too much about how much money I'm spending I wont ever get it) I went to Mike's Camera in boulder and bought it.  Now what makes this lens the perfect starter lens for doing star scape photography is not only the crisp image you get, and the super wide aperture of f/1.8 but also the price.  Brand new I've found this lens online from trusted retailer's sites for only $160.  At a specialty camera store like Mike's Camera expect to pay a little more however... Just think of the extra money though as the price to pay for instant gratification - no waiting for that pesky shipping.

So I paid extra for some instant gratification and went straight from the store up to Jones Pass (near Berthoud Pass) to find a sky free of light pollution. 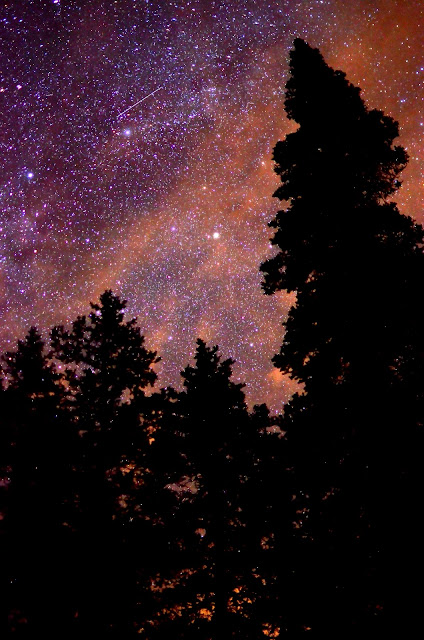 I used some trees to silhouette the foreground, as if to let you know that this photo was still taken from earth, and not from some crazy NASA space telescope.  For this shot I bumped up my ISO to 1000, and used the handy new lens at an f-stop of 1.8 for an 8 second exposure.  The white balance I set to roughly 3500k giving the sky a purple feel to it.  The orange haze in the shot is from clouds sailing high overhead and catching the light pollution (wasn't far enough away apparently) from Denver.

The hardest part of shooting the stars I realized right away was trying to figure out how to get the stars in focus.  My first few shots rendered a colorful blur of the cosmos resembling a blurry bowl of Trix cereal.  I soon came to figure out that if  you use the D7000's live view (the LCD screen) You can zoom in on a single star and adjust your focus until the star is crisp and twinkly! Once you have your focus set, you are good to shoot!

My next star adventure led me out in late fall up Hwy 7 through Lyons, CO and up to Brainard Lake.  Stopping first at Hall Ranch I was able to capture 3 shots of Top Hat Mountain, which I later stitched together for the full photo.

Continuing up the road to Brainard Lake, I found an amazing scene!  Light pollution from the front range actually lit up the mountains while the completely dark western night sky provided a backdrop of stars like I have never seen before.  The below shot is also a panorama of 4 shots stitched together from right to left. 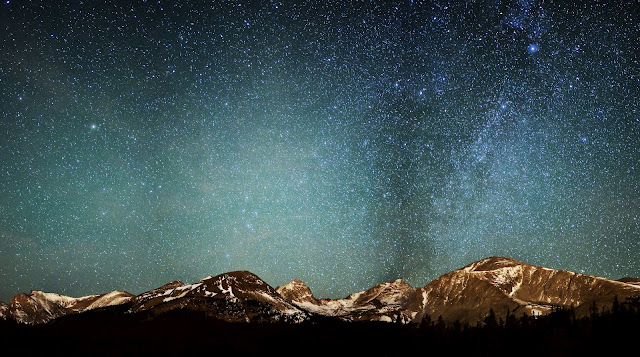 Below - With a 1.8 f-stop you can even get a crisp shot of the Milky Way.  This photo was taken near Steamboat Springs, CO.  The foreground is Young's Peak, and the backdrop is our night view of our very own home galaxy.  Makes you feel pretty special knowing this galaxy is one of hundreds of billions out there! 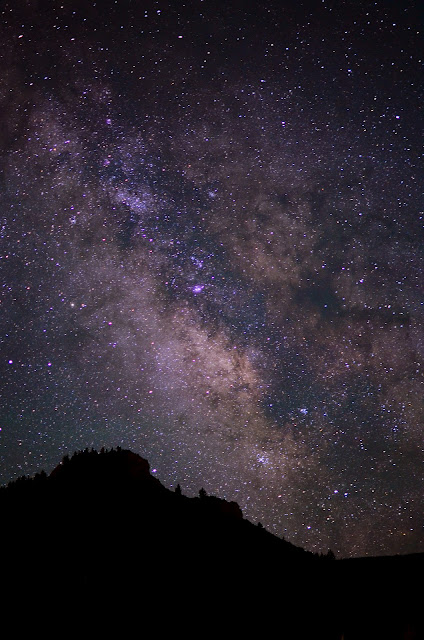 Getting a foreground shot with a starscape in the background is challenging, but creates an amazing image.  Use what ever lights you have, be it a flashlight, a campfire, or the light of a full moon/light pollution to light up our world under the night sky.  The contrast between the terrestrial and the cosmic brings to life an image straight out of science fiction. 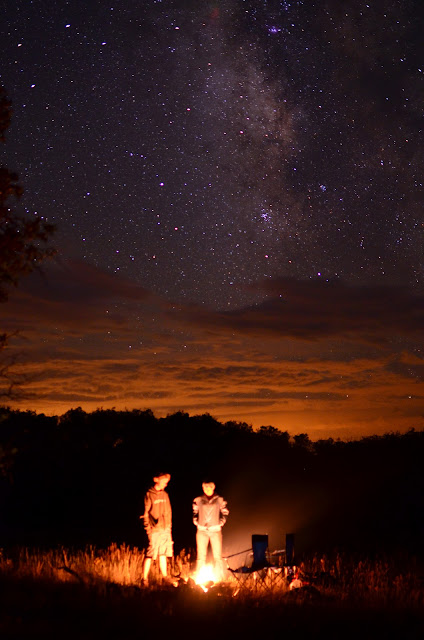 Below is another shot from the campfire.  The light on the trees is from the campfire behind me.  The blue sky and the dark red on the normally white aspens is the result of a very cool white balance right around 2500k. 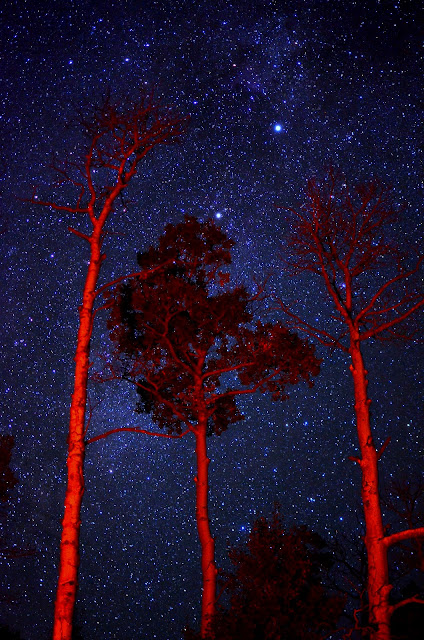 Finally my most recent star shot from last weekend when I was trying out the new lens. The landscape is lit by the light of a nearly full moon. Patchy cloud cover and an orange hue from the distant cities of the front range create the sky of the terrestrial, all while stars from the cosmic come twinkling through.
Lastly, as I do with all my great photo adventures, I had to hop in my own shot - Just to prove I was there :) 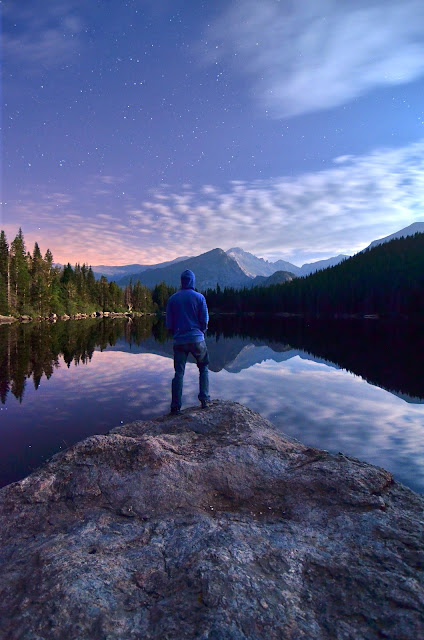 I will cover Star Trails in another blog in the future.  I am just beginning to experiment with star trails and don't know enough to write an informative blog on the subject.

As always, please check out these images and many others on my main gallery site www.lohrphoto.com